It’s one of the biggest video game related event in France, 270 000 visitors this year.

Not sure if our experience will be of much help for non french dev, since our booth was part of a small “Made In France” area. The space was less expensive, and the group who organized this area included a lot in the fee: booth, computers, screens, 500 cards with a unique number on each (we used them to give away the game, see below), paintings on the side of the booth, and even sandwiches and beverage ! The staff was extremely nice, thanks again guys !

Most of the crowd wasn’t specifically into indie games and we were in a smaller less crowded hall than the two main, but we still had a steady flow of players.  It allowed us to test the game overall concept and humor, and we got a great response.

We met (mostly) french media interested in indie games, and got about 6 online reviews and 1 online video review.

We did a special build for the event: we chose to start the demo with an already built mansion  with a few unfinished rooms (instead of leaving it entirely to the player), have a first wave of victims, and then ask the player to build some furniture, and leave some time for them to finish the rooms before the next wave.
It tested well, but we’re not sure if it was a good idea or not… On one hand it allows for a faster test (which is a good thing considering the players were standing, the screen were neck-hurting high, and Machiavillain is not multi-player which makes it difficult for someone in a group to spend too long a time on a solo game). On the other end, part of the fun and strategy is deciding what type of room you build. So we still have some thinking to do about how to make a simulation game convention-friendly.

We gave Steam keys to players who passed the second level of Freaking Meatbags (our other game) in exchange for just an inscription to our newsletter. We used the cards included with the booth with unique numbers to enter on our website, and got 60 subscriptions out of 67 cards given.  It was nice to see smiles on people faces not aware they’d be getting the game for free before their play session.
We even got kids coming back to ask us if it was for real 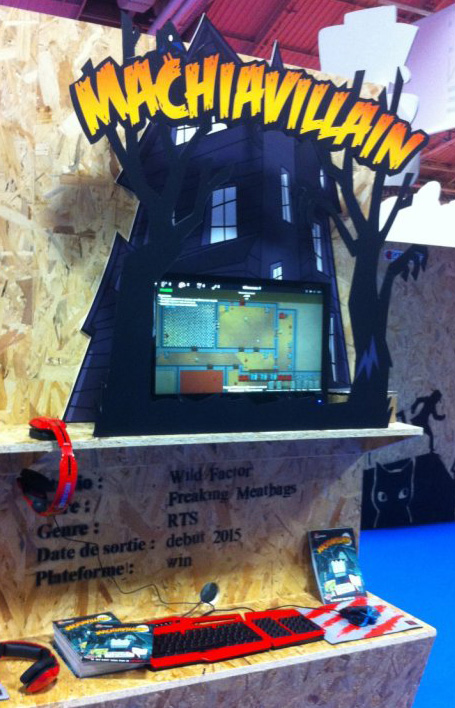 Decoration mistakes: we had to re-print the title boards because they were too heavy for double tape.
Advice : heavy plastic may be more resilient, but it’s also quickly too heavy to  hang it. We ended up redoing everything in lighter foam board.
On the other end, it is less resilient and the tree felt and broke so many branches we ended up with a  tree trunk XD

Our main mistake was to not ask if players who enjoyed the game wanted to join the mailing list or just leave a note pad for them to write their contact if they wanted.

Some stuff were stolen on the booths around us (a couple mouses, headphones, a mouse-pad) until the association secured everything with cable clamps.

Standing up for 10 hours straight can be hard, we ended up bringing our own chairs. We weren’t able to sit for long because of the player flow but it helped. Beware, any unattended chair will end up with a tired visitor sitting on it

We also attended the same time the Game connection which is a professional event (developers, editors, and french as well as international press).

← Back from the Paris Game week.
Happy new year ! →

This website uses cookies to improve your experience while you navigate through the website. Out of these, the cookies that are categorized as necessary are stored on your browser as they are essential for the working of basic functionalities of the website. We also use third-party cookies that help us analyze and understand how you use this website. These cookies will be stored in your browser only with your consent. You also have the option to opt-out of these cookies. But opting out of some of these cookies may affect your browsing experience.
Necessary Always Enabled
Necessary cookies are absolutely essential for the website to function properly. This category only includes cookies that ensures basic functionalities and security features of the website. These cookies do not store any personal information.
Non-necessary
Any cookies that may not be particularly necessary for the website to function and is used specifically to collect user personal data via analytics, ads, other embedded contents are termed as non-necessary cookies. It is mandatory to procure user consent prior to running these cookies on your website.
SAVE & ACCEPT